After the few weeks break from Christmas celebrations and the winter weather, we were finally happy to get the Iris's Sustainer up in the air as a single stage rocket, although the second flight wasn't as successful as we wanted it to be. We will get the rocket up in the air with the lessons learned.
The rocket was easy to set up as usual. We set up the rocket a little farther away than usual just incase the rocket decided to misbehave. One of the new things we were testing was a Clark Cable Tie launcher that fitted to the normal Gardena-launcher.
CLARK CABLE-TIE LAUNCHER
The Clark Cable-Tie launcher was a fairly simple build. Te took a half-inch CPVC pipe and cut it down to about 12 inches in length. We then heated the pipe about 3 inches from the end and put a bulge in the pipe as the seal. 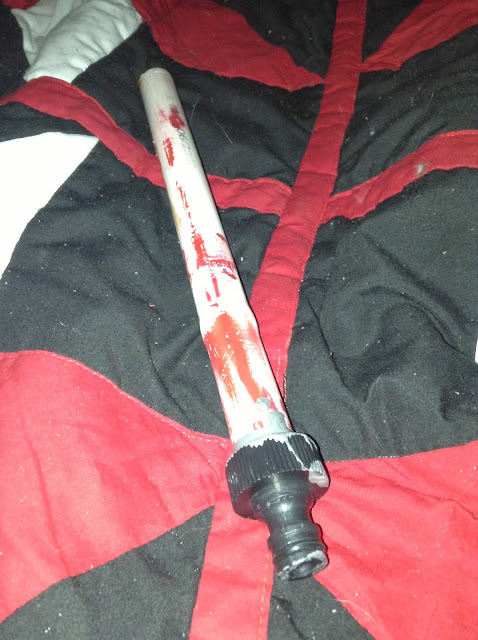 I then took a 9mm Gardena nozzle and epoxied it with JB weld 24 hour epoxy. We then acembled the rest of the release head and let the epoxy cure for a few days on the heater. 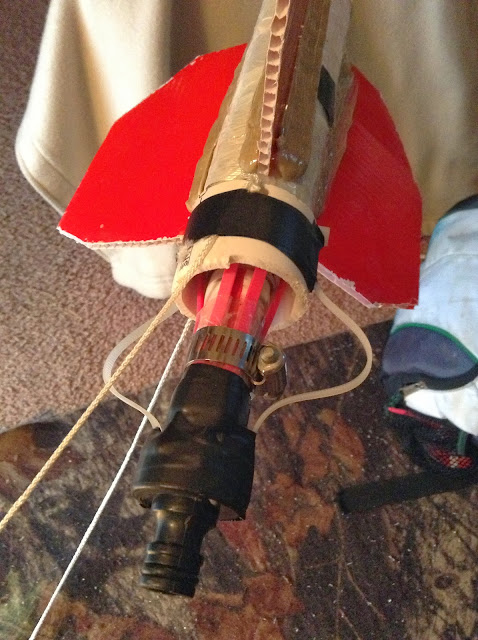 FLIGHT #1
After setting up the rocket we first pressurized it to 50PSI to check for any leaks. This gave the air in the rocket sone time to cool. With no leaks found, we pressurized the rocket to 175PSI. It took about a minuet to pressurize. When it came time to launch, the rocket released smoothly and accelerated very nicely. It made a very loud bang, but you can't really hear it in the video. We noticed right away that one of the fins came off during the high speed launch. Apon further inspection, we found that the fin ripped in half in a perfect line. Even without the fin, the rocket seemed to go up longer than normal and deployed it's parachute a little past apogee. The rocket went higher than we were expecting! 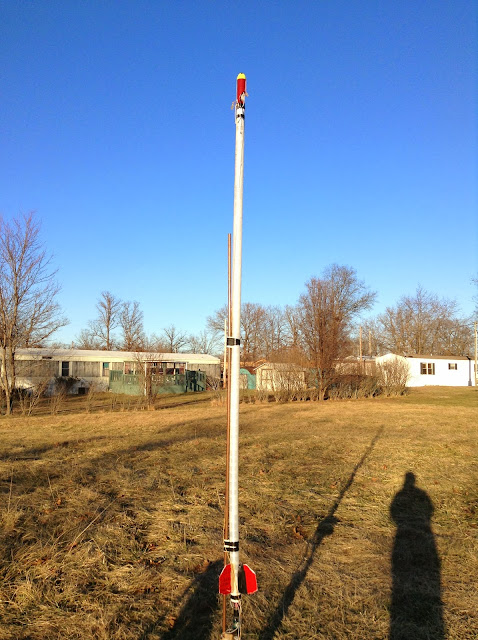 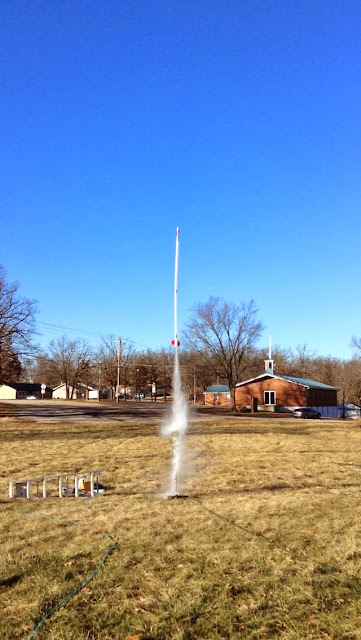 Max Velocity- Rocket Bending And
Fin Rips Off
FLIGHT #2
We set up the rocket the same way as last time and launched. I forgot to grease the Tomy Timer's spindle with scillicone grease because all of the other distractions and excitement. Again the rocket took off with a loud bang and sped up nicely. You can never get tired of those loud launches. :) The rocket went up a ways up again. It tipped over apogee and started coming down, but there was no parachute. It was quickly gaining speed and it looked like it was going to hit another house. The parachute finally deployed about 100 feet above the ground but promply sredded all but 1 shroud line. Thankfully the rocket missed the trailer by about 10'. We were pretty stumped on why the parachute came out late, at the timer was set for about 6 seconds again. The only conclusion dad and I can come up with is that the rubber  band didn't slide off of the timer untill the last moment.  Here's a video of the two flights
<iframe width="560" height="315" src="//www.youtube.com/embed/HtR0uLsU96I" frameborder="0" allowfullscreen></iframe>
DAMAGE 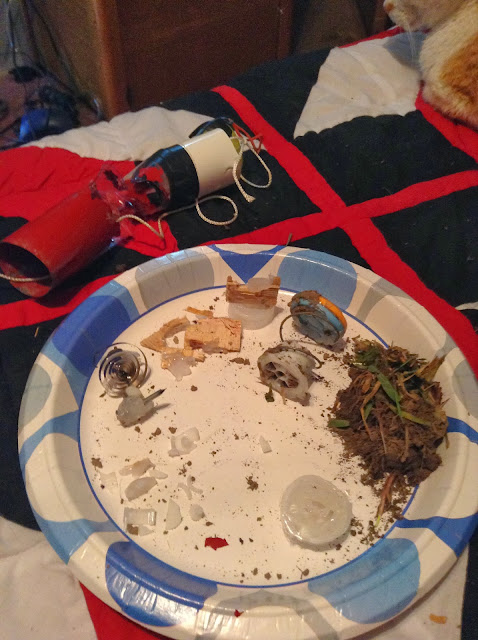 I Disassembled the deployment system to see how much can be salvaged. Really the only thing that can be reused is the spring that pushed the parachute out of the rocket, and the bottle caps used to hold the deployment system in place. The Tomy Timer is trashed, as well as the  plywood base.
What's Next?
We are going to try to get this rocket repaired as quickly as possible and get it up in the air again as a single stage soon. After about 4 or 5 successful flights, we are going to construct the stager for the rocket. For the time being, happy holidays and a happy new year! :)
Posted by Reptiglorand at 6:56 AM No comments:

This is most certainly a project we wanted to do for a while, a multistage water rocket with a FTC sustainer. While designing the rocket, I thought about one of the major unknowns, how much the sustainer will bend during the acceleration phase of the flight. We will probably use a small nozzle for the sustainer around 9 or even 7mm. While doing a bit of research, I discovered that one of the first water rockets to break 1000' was a multistage water rocket with a FTC sustainer and a PET bottle booster. This is very convincing. We test fitted a test rocket together to get an idea on how tall the rocket was going to be. 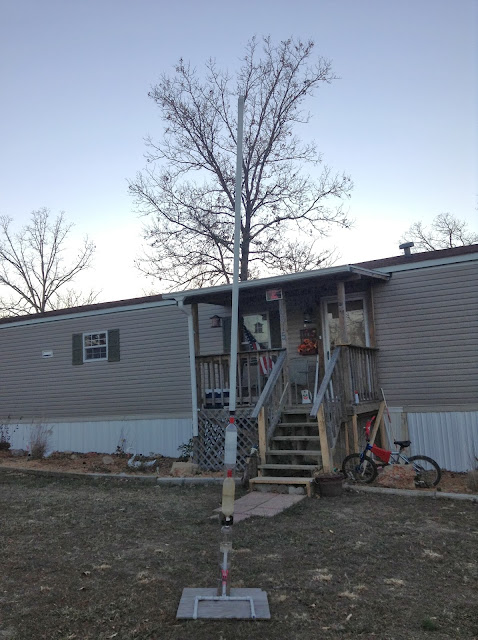 Yes, the ladder is going to be needed to help set-up the rocket! It stands about 14 feet tall without the parachute deployment system(still yet to be designed). We are likely to use a 15 or 16mm nozzle for the booster and 9mm for the sustainer. For the stager, we are likely to use AirCommand's MK3 stager. The Capacity of the whole rocket is likely to start out at around 7 liters(4 liter booster, 3 liter sustainer), and increase the booster capacity later on. The initial launch pressure is likely to be around 100 psi, although we may bring it up to around 130PSI later on. After this project, we will likely start up the fiberglass rocket again.
11/28/13
Today we glued the fins to the sustainer with PL Prenium. 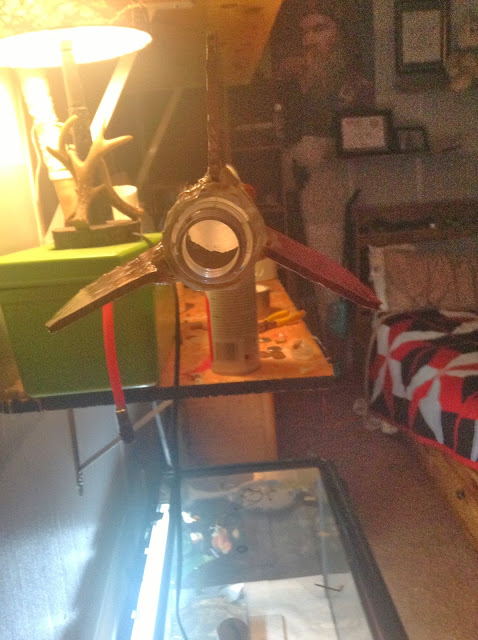 I just eye-balled the fin allighment so I'm taking a chance of the fins being off. We did a rough simulation of the rocket on Cliffard's Health simluator. It predicts around 900' at 100psi. This calculation is pretty sketchy because we don't know the weight or final volume of the rocket. It's also hard to enter the two diamaters of the booster and the sustainer, so the altitude could be a lot less.
12/22/13- FTC Rocket's Parachute Deployment System
Today we designed the parachute deployment system for the FTC sustainer. The system is very similar to the one shown here: http://www.wra2.org/forum/viewtopic.php?f=5&t=2217
The main difference is that the coriflute plastic was replaced with a plywood base.
That does add a little more weight, but is more stronger. In total the system weighs
56 grams. 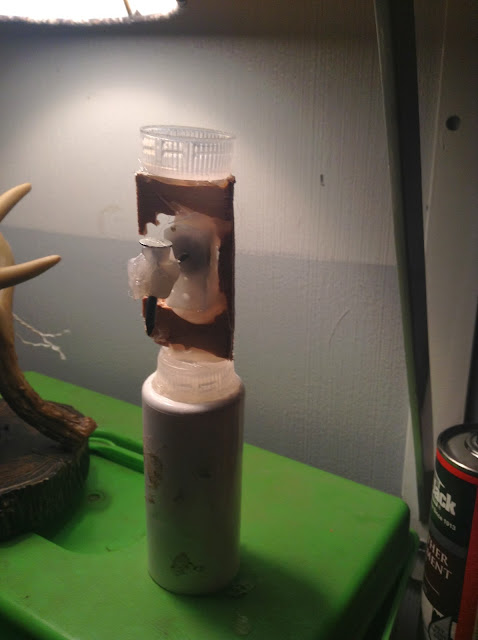 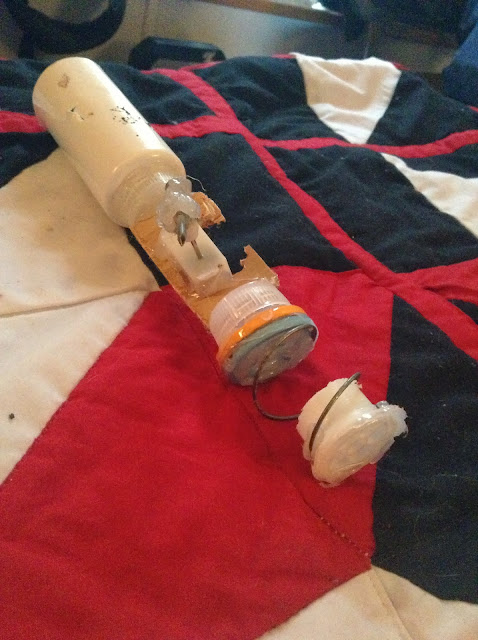 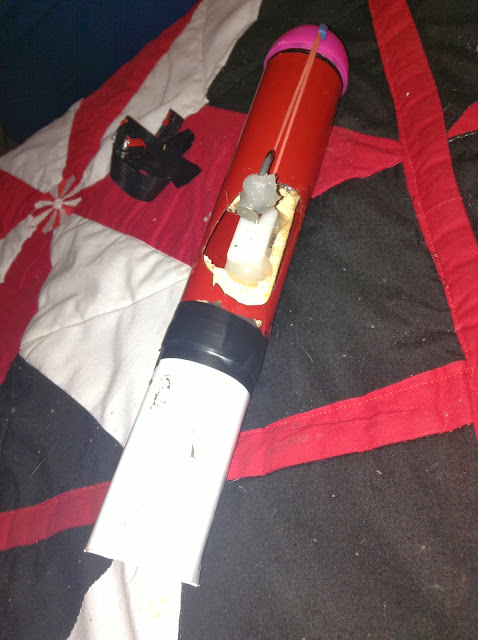 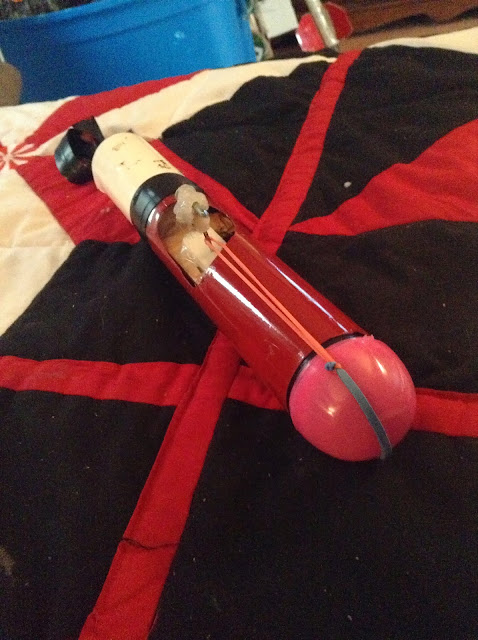 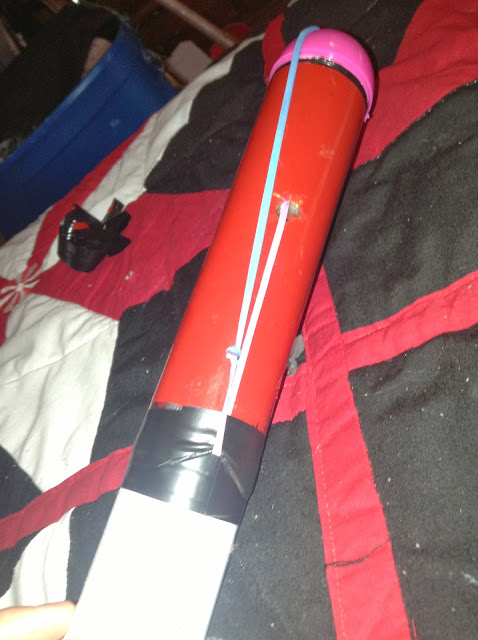 We have tested the system many times, a 9/10
Successful deployment. The one time the deployment system
Failed is when the rubber band didn't come off of
The timer's spindle. A little silicone grease fixed
it up. I also did a quick seal check of the rocket to 75
PSI. I decided that we are going to fly the rocket as a single
stage first to test the deployment system this week. 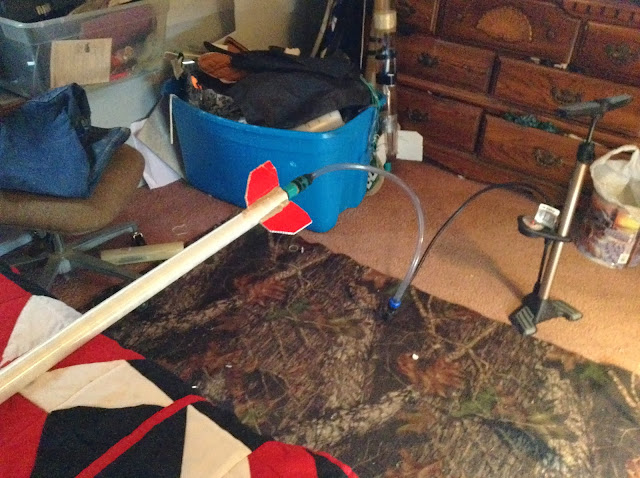 Posted by Reptiglorand at 3:08 PM 2 comments: 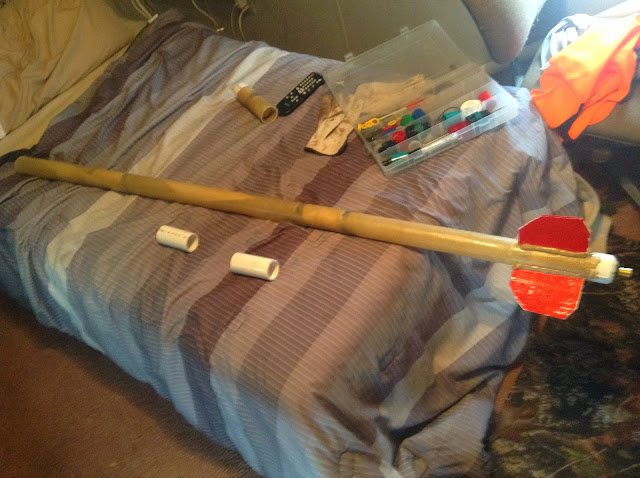 Over the past months I've been busy with school and other non-water rocket projects, so I haven't had too much time to write in this blog. So here is a update of what we've been up to other than the normal water rocket flight days.
FIBERGLASS ROCKET
Since the last explosion of the fiberglass reinforced rocket, dad and I have been pondering weather or not to rebuild it. We've decided not to rebuild it, but to make a all fiberglass rocket. We chose that so we could directly control it's property's and hopefully make it able to withstand at least 400psi. Many of the building Technics are browwed from the model rocketry world and AircommandWaterrocket's Shadow build log. We are planning to use a 15mm brass nozzle. Overall the rocket will have a Capacity of about 4 liters.
Yesterday we made a small test roll of fiberglass to see how easy it would slide off of the 60mm PVC pipe and Glad freezer paper. Thankfully it slid off easily. We decided to make 2 test end caps to pressure test the tube. We glued the 2 endcaps to a 4inch long pvc pipe and glued the end caps to the fiberglass tube with PL Premium. We let it cure for 4 days before we pressure tested it yesterday. Thankfully it held up to 570PSI before bursting. It was loud even though it was in a old scuba cylinder and had pellows on top of it. That's the good thing about living in the country so we don't have neighbors complain!
We went ahead and made 3X4 foot tubes today and let them cute for a few hours. We then coupled them together using PL premium. We then added another layer of Fiberglass bringing it to a total of 6 layers. The coupler is made out of 4 inch long PVC pipe. I found a 15mm nozzle in my 'junk' box. Ill use this for the nozzle. I cut a hole for the nozzle in a end cap then epoxied it in with 24 hour epoxy. I then glued it on to a peice of PVC pipe and glued that to the fiberglass tubes. Stay tuned to see more progress of the fiberglass rocket. Here are a few pictures: 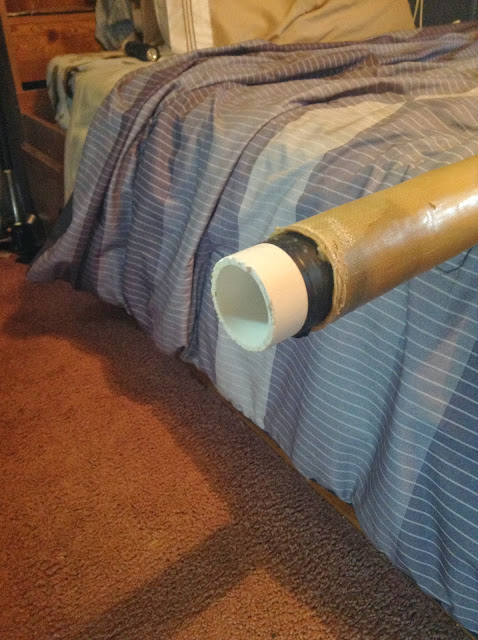 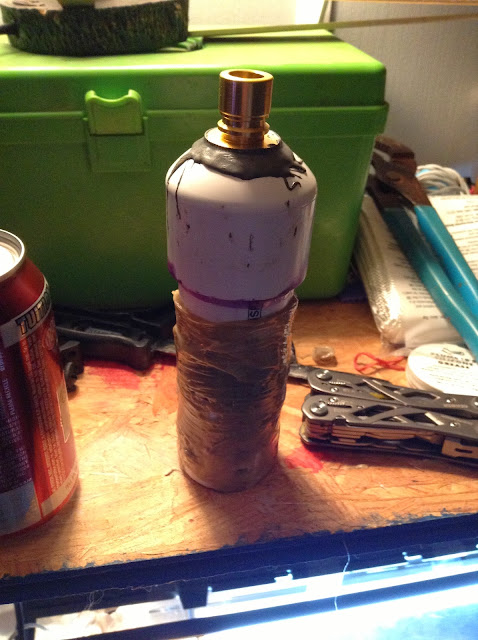 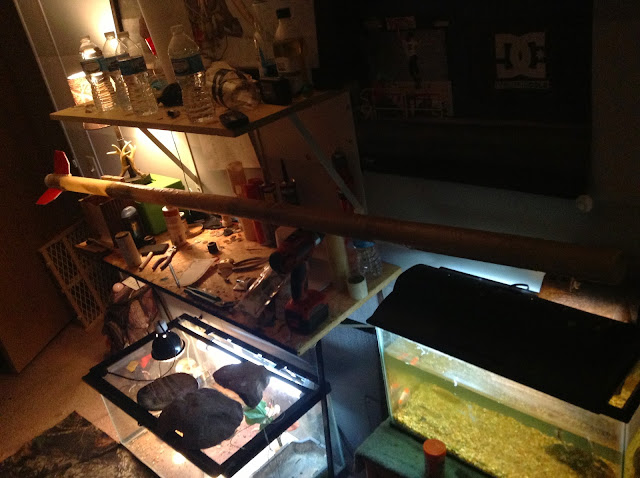 11/18/13 Today we pressure tested the rocket today to 400Psi before the middle section sprang a leak. We let the rocket pressure drop down to around 50psi before we went to look. The tube cracked about a inch above the coupler. Sadly we are going to put this project aside to work on a Diffrent one we wanted to complete this year. 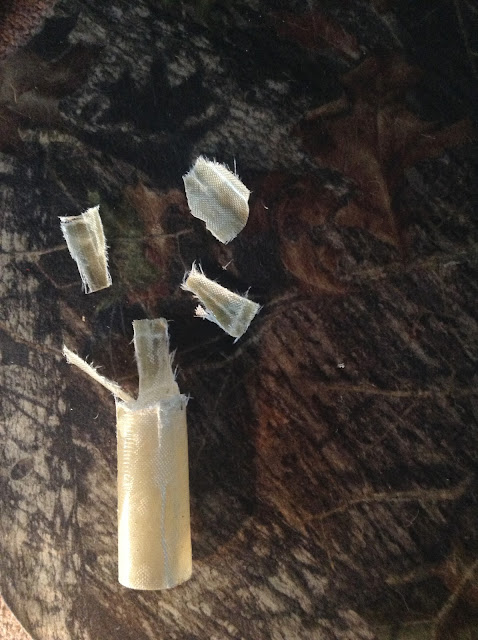 Posted by Reptiglorand at 4:09 PM 3 comments:

Over the week I have been building a FTC water rocket. It has a 3L capacity and *should* be able to withstand 150 psi. So we pressurized it to 150 psi. But just 2 seconds before my dad pulls that almighty string that launches the rocket, BOOM! Then it was gone... I couldn't Beleave how loud it was. You could hear it echo from the trees around us. Personally I was expecting one of the bulkheads to give way than the pressure chamber it's self. It was awesome! 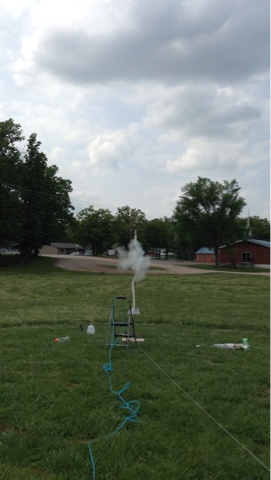 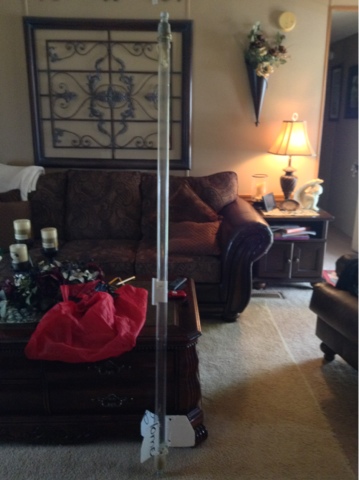 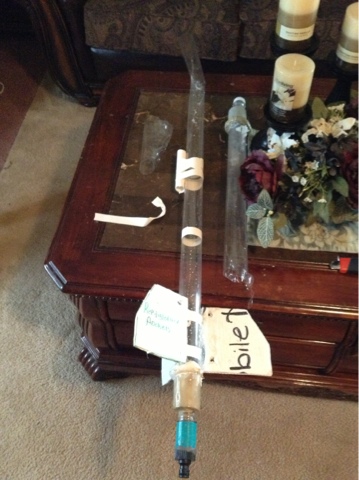